You are here: Home


The Depth Estimation feature enables the operator to receive an immediate indicative value for the depth of a specific target visible in the displayed data using the Cursor “Eye” to highlight it. 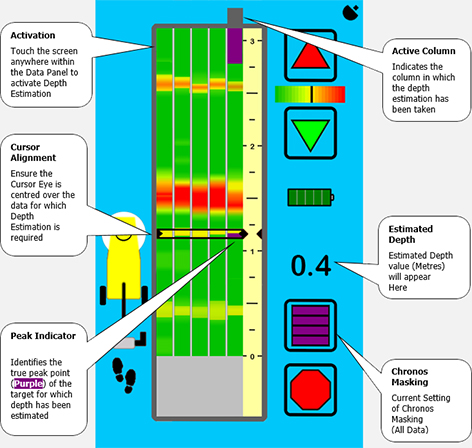 With the Eye of the Cursor positioned over the chosen data, you simply touch the screen anywhere within the Data Panel to activate the Depth Estimation feature. The resolved depth value will appear in number form on the right hand side of the display, above the Masking ICON. This is the estimated depth in metres relative to the data positioned within the eye of the cursor only.


As not all linear features are likely to run precisely perpendicular to the direction of each scan line, the Trackback feature is also equipped with Sticky Lock technology. This temporarily suspends the depth estimation column advance feature, allowing the operator to roll the e-Safe forward or backward to re-position the cursor, then tap the screen within the data panel again to take another depth estimation in the same active column. Tapping the screen once more; without moving the e-Safe, will lift the suspension and allow the active column to advance once more.